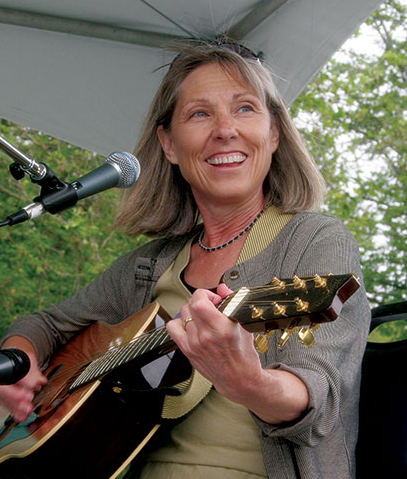 Cindy performs as guitarist and vocalist in the Dos Valley Trio, the Mount Diablo String Band, and the Liedstrand Family Band. She grew up in Fresno, California and was involved in school choruses, church choirs as well as being a ballet, modern, ball room and folk dancer. Cindy became involved in the traditional music scene in the late 1970s after studying textile design at UC Berkeley and in Sweden, and microbiology and biochemistry at Fresno State. She met Kenny Hall in 1977 and he told her to find Harry Liedstrand.

While Cindy was raising a family with Harry, and working as a laboratory scientist, she began playing backup rhythm guitar for Harry’s fiddle tunes, and she also enjoyed singing harmonies with both family and friends. An abundance of rich and unexpected opportunities has given Cindy the unique experience of exposure to and participation in the vital folk music tradition of fiddling.